Scientists scramble to stop bananas being killed off

This article is more than 1 year old

Banana plantations in Australia, south-east Asia, Africa and the Middle East have been ravaged by the ‘fusarium wilt’ fungus – and Latin America could be next. Photograph: Glow Wellness/Getty Images/Glow RM

A British company has joined the race to develop a banana variety resistant to diseases and climatic changes that threaten to disrupt the availability of the country’s favourite fruit – or even kill it off altogether.

The UK alone consumes more than 5bn bananas a year, while the fruit is a staple food in many poor countries and accounts for an export industry worth $13bn (£9.8bn) a year.

But the global supply chain is threatened by a virulent disease that has been attacking plantations in Australia, south-east Asia and parts of Africa and the Middle East.

As experts warn the fungus known as “fusarium wilt”, or Panama disease, could spread to Latin America, from where the majority of bananas are exported, scientists are scrambling to create a more robust variety that could help sustain the crop.

A single type of banana, called the Cavendish, accounts for 99.9% of bananas traded globally. It replaced a tastier variety wiped out by disease in the 1950s.

Now researchers at the Norwich-based startup Tropic Biosciences are using gene editing techniques to develop a more resilient version of the Cavendish after securing $10m from investors.

The company’s CEO, Gilad Gershon, said: “In the developed world we tend to take bananas for granted. A banana found in your local supermarket grown in Costa Rica and shipped to the UK probably costs less than an apple grown 20 miles away.

“If you look at the broader consumption on top of exports, the banana industry is worth a massive $30bn a year. However,people have been getting increasingly worried because the plant is heavily cloned so if you have a disease that can kill one tree, it can potentially wipe out the entire industry.”

Tropic Biosciences, which has 17 employees and is also developing a coffee bean that is naturally decaffeinated, has already conducted successful gene editing on a banana cell which can be grown into a full plant. 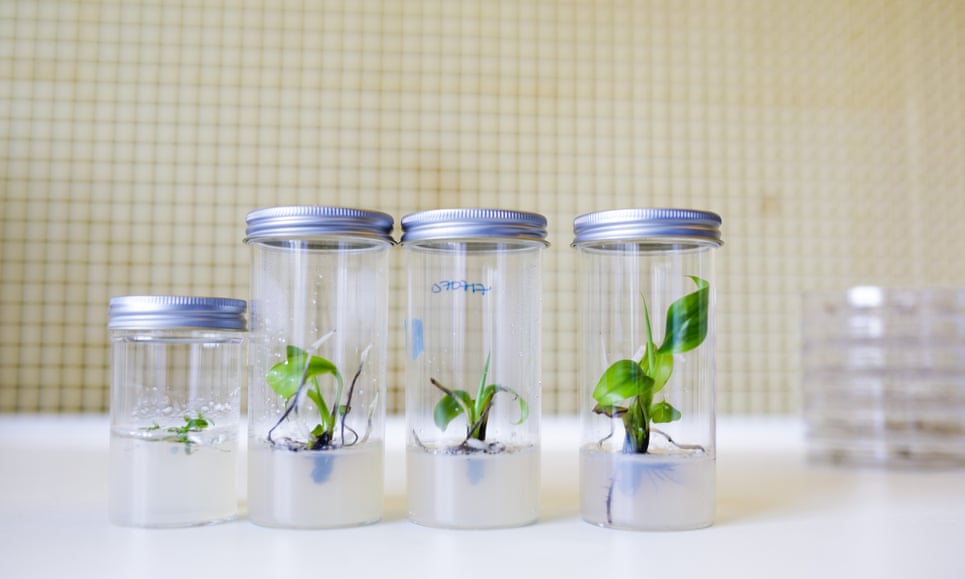 Eyal Maori, the chief scientific officer who co-founded the startup with Gershon, said: “It is just a matter of time before the fusarium wilt disease reaches central and south America, which is why there is an urgent need to develop a resistant banana.”

Maori, who revealed preliminary results had been encouraging, said the new funding would be used to start field trials in central America, the Philippines and Turkey over the next year.

Gershon said: “It is not just about disease resistance but also about easing the environmental burden. The new variety will mean the need for less fungicides and higher yields for farmers. The trials should show the plants can perform well in real world conditions and demonstrate value to the growers”

They hope their product might be of commercial value to farmers like Agnes Dzenje and her family, whose crops have been affected by another disease, banana bunchy top disease.

Dzenje, 75, resides in the Malawian village of Kankhomba, a predominantly agricultural area where banana infection has brought devastation to those who have relied on the crop for their livelihood.She began banana farming at the age of 18.

Dzenje said: “My parents paid for my primary school using the money realised from selling banana fruits. I would help around the farm sometimes and that’s when I learnt more about farming.”

She later paid her own children’s school fees, improved their diet and supported the family with the money she made from banana farming.

But in 2010, she spotted that something was wrong. Some varieties in her garden were producing very small leaves, and the fruit would not ripen. Telltale dark green slashes appeared on the undersides of the leaves as, one by one, different varieties succumbed to the attack.

“We started burning the fields to eradicate the disease but the problem persisted. The agriculture researchers told us that this was a dangerous banana disease and we needed to uproot all the plants, and that they would give us fresh plants. But I am still waiting,” she said.

Malawi is one of 11 African countries affected by banana bunchy top disease, which has wiped out plantations across the country and forced farmers out of business.

Spread by aphids, the only treatment is to uproot and burn all the plants. But Misheck Soko, chief pathologist at the nearby Bvumbwe Research Station, is finding it hard to convince farmers to follow the instruction.

“It’s been a very difficult task to convince them in removing all the plants, but we can’t give them clean suckers if the area is still infected,” said Soko.

In Namkhomba area alone, two large banana farms now lie abandoned. The effect is being felt all over Malawi. The price of bananas has risen exponentially, with market stock mostly imported from Tanzania.

The government has embarked on projects to control the situation by importing clean plants from France and South Africa, but the intervention has come too late.

The scientists in Norwich are hoping their business venture could offer fresh hope for Malawi and other countries suffering the impact of banana diseases.

Gershon said: “After two or three years of trials we hope to commercialise the banana plants. The value for farmers is very clear. What we are hearing from them that they want this as soon as possible.”

However, they face competition from other research companies and academic institutions.

Dan Bebber leads the BananEx Project at Exeter University, which investigates the resilience of banana production and supply and is funded by the Global Food Security Programme.

And last year researchers from Queensland University of Technology in Brisbane, Australia, designed a genetically modified Cavendish banana with resistance to the devastating soil-borne Panama disease.

He added: “In terms of the industry under threat this is one path we can take but even if you are able to tweak a Cavendish clone to be disease resistant there is nothing stopping the fungi from evolving to beat it again.”

Bebber said other options should be explored in order to protect the industry such as increasing the diversity of production systems such as trying to create healthier soil systems better able to retain nutrients, and using biological controls for diseases such as bacteria and fungus.

He said there are other threats such as climate change. Colombia, the biggest supplier to the UK, has been hit by both droughts and floods.

Meanwhile the Dominican Republic which supplies most of the organic bananas to the UK has been hammered by hurricanes in recent years.

Bebber said: “We can already see what we call in industry, a tightening of supply, due to climatic effects. If two or three countries have bad weather, the supply tightens. Importers are buying bananas taken out of the ripening centres too early in order to keep shelves stocked.

“So if you see green bananas in the shop you know there is an issue with supply because the taste in the UK is for yellow bananas with just a tiny bit of green.”

… we have a small favour to ask. More people are reading and supporting The Guardian’s independent, investigative journalism than ever before. And unlike many news organisations, we have chosen an approach that allows us to keep our journalism accessible to all, regardless of where they live or what they can afford. But we need your ongoing support to keep working as we do.

The Guardian will engage with the most critical issues of our time – from the escalating climate catastrophe to widespread inequality to the influence of big tech on our lives. At a time when factual information is a necessity, we believe that each of us, around the world, deserves access to accurate reporting with integrity at its heart.

Our editorial independence means we set our own agenda and voice our own opinions. Guardian journalism is free from commercial and political bias and not influenced by billionaire owners or shareholders. This means we can give a voice to those less heard, explore where others turn away, and rigorously challenge those in power.